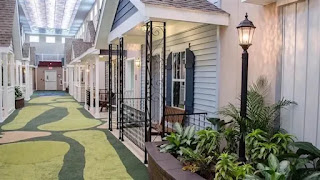 "One man turned nursing home design on its head when he created this stunning facility."*

It unsettled me. It's sad, it's hopeful. Mostly it endeared me. I have worked with many people living with dementia. Many times they seem blank, distant, unreachable. Occasionally they are irascible, combative, silly, or rude. They can be hilarious and good-natured. They can grope, throw food, or repeat the same word for hours.

They can stare at you like you are the last real person they will ever remember, just because you were there at a particular time.

I have often observed such people to display hallucinations, or speak as if to spirits, or describe the world in detail as it was 50 years ago, but to them it feels like today. I've wondered, "Is she just lucky to have such a pleasant hallucination?" when one has seen many appear to be having pretty frightening delusional experiences.

But then what is "delusional"?

Is it delusional to attempt escape of a fragile and painful body, immobile, perhaps fetid, through the agency of a flight of fancy that seems so real? Or perhaps it's an unsurprising that such a person could find themselves in a fearsome funhouse full of unfamiliar sights and sounds and strangers.

So I read this and found myself really liking the concept. Give in to the delusion. Why fight it? Too often we fight against Nature. There is no winner inasmuch as we all will die. Some believe they will go on to another life...but...why the rush? So much are we tuned into our embodiment of ourselves--our actual bodies--that it becomes hard to imagine actually leaving this mortal life. I feel that way. I like this life. This causes me to wonder if others, whose lives perhaps weren't so lucky, would actually be served by a magical delusion that seems so real.

Except when we interrupt it. Suppress its expression.

There's been a movement in geriatrics that aims at not trying to reorient our memory-challenged elders when they are having a delusion. I've seen this begin to spread in health care, and in fact our own students benefit from this research. So it's getting around. A good idea.

This gives me hope that we are really beginning to put aside our assumptions and lean into Nature. Without that lean we're just regarding things at a distance, struggling with our ignorance, and perhaps robbing people of a sort of restorative humanity they may need in their final days.

* Although I did not verify this story, it's plausible, and seems like a pretty good idea in any case.
Posted by Eric Doerfler AltMedResearch at 9:16 PM