Well I'm back after a whirlwind month--April tends to get very busy with grading papers and projects attending to all of the other things on our to-do lists before things go quiet at campus over the summer. So here I will share a couple of things I've been saving up this past month.

Your "Brain" is Bigger than Your Brain 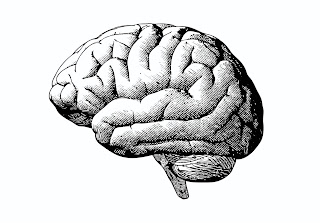 Researcher Sarah Garfinkel at the University of Sussex, which I found on the site Science of Us (New York Magazine's website) has been studying the connection between our traditional "center of consciousness" and the rest of the body. In this piece from nymag.com in January, Drake Baer reports on her team's findings concerning awareness of one's own heartbeat and how it influences what we think. Here's a link to the article, if you want to check it out.

The gist of it is this: We tend to think of our "mind" as residing in our brain, and the brain is an organ, and it connects with, receives information from, and sends information to our "other" organs. Garfinkel  suggests that perhaps we're thinking about this wrong, that the brain is embedded in the entire body, which is kind of an extension of the brain. More simply, your entire body is your brain. Your consciousness is just you--"balls to bone", as the The Oracle says to Neo in The Matrix.

In the article Garfinkel says,

“I think the general public kind of knows it instinctively, they know if they exercise they feel better, they know their mood changes, their cognition and memory increases; people who meditate also see changes in their cognition and emotion.... It’s a responsibility of the scientific community to better understand these mechanisms and promote them as scientific — I feel instinctively that there’s a split where people think there are ‘scientific treatments’ like drugs, and there’s these ‘alternative treatments,’ and why do we need the distinction? [emphasis mine] If we can look at body-brain mechanisms, they can be scientific treatments as well — we just don’t yet know the mechanisms.”

This isn't new, and even the research exploring this notion isn't new, and some of it goes back thousands of years. Without getting into detail here, the idea that the body and the mind are not two but one--the bodymind--is something we have intuitively grasped since the Greeks (and perhaps earlier, although I'm not historian) and certainly by the Chinese, who developed a holistic medical system that recognizes and exploits this understanding of the intraconnectedness of ourselves.

Several nurse theorists have proposed this understanding of how we are "in the world" since the 1970s: unitary beings from nerve cell to the surface of the skin, but nursing research on this concept has been limited and the notion remains more philosophical than practical. Garfinkel, and researchers like her in psychology, nursing*, and medicine as well as other disciplines are beginning to crack the code of what this might mean in a more practical sense going forward.

I'll probably return to this concept in a future piece.

This is a piece a saw at Medscape, a webservice for physicians and nurses that specializes in practical information for practice (like, a comprehensive catalog of diseases and their presentation, work-up, and treatment--very useful), news, and opinion. (I link to it here, but it requires a sign-in, so you may have trouble getting to the original.) Author John Watson begins by saying that,

"For many of the physician contributors to the blog Science-Based Medicine..., which takes aim at unfounded medical practices and beliefs, the continued rise of integrative medicine...represents one of the most exasperating trends in contemporary healthcare."

Yes, trying to understand why so many people insist on exploring the limits of human health utilizing technologies and philosophies outside of those "approved" by the masters of The Factory is very exasperating!

One contributor states, "Some clinics just offer acupuncture, for example, and others offer the complete buffet dinner of nonsense." Of course, he's implying that both acupuncture and traditional Chinese medicine are "nonsense"--which is weird because both have good scientific evidence to demonstrate their efficacy for many conditions.** An editor at SBM adds "Integrative medicine is very good at co-opting certain science-based modalities, such as nutrition, exercise, and lifestyle changes, which they identify as somehow being alternative or integrative, when in reality it's just medicine."

His genius would be more impressive if medical curricula actually bothered to really teach physicians how to integrate these things into their own practice, rather than jamming people end to end into 15 minute visits to fix problems that could be dealt with in more ecological ways. Physician Andrew Weil has argued for this elsewhere (and earlier): that getting people to, say, exercise isn't just about telling them to go exercise (when clearly, the physician doesn't appear to get any!), it's about a philosophy of holistic understanding of the physis, the body--or what Garfinkel might just call the Whole Brain.

These "alternatives" on their list, as the SBM editor points out, are alternatives because medicine has divested itself of imagination at the clinical bedside. Don't complain about people co-opting your schtick if you yourself have walked away from it!

The article then lists 7 clinical practices:


(I swear, I counted it twice and only came up with these six.)

I'm not going to comment on each of these here today. I will note that the people that Watson interviewed for the piece don't apply much discrimination to their analysis. All of the practices are just bogus, and "fraudulent." Yes, I don't care for fraud either, but one has to ask the question: if people could get hope and a listening ear from their regular doctors, don't you think there wouldn't be so much of a market for some of these practices?

I realize that some of these practices could potentially hurt some people sometimes (and I have actually seen that happen, so it is real), but regular medicine just assumes that when people get hurt within their model, it's just bad luck.

So what if my "proven" cancer treatment gave you permanent nerve pain and you died of your cancer anyway, after suffering through that misery. Just bad luck I guess!

Look, I'm not all gung-ho on a lot of the stuff in the list above, either, but then I am a homeopath, so I feel like I'm giving most of my patients the answers they seek, and a lot of the practitioners who try the stuff on that list are often just trying to do the same. At least I give them an option and some hope. Some don't benefit; most do. At the least the ones whom I couldn't help don't end up with permanent nerve pain or heart failure (cancer drugs), suicidal mania and tics (antidepressants), drug addiction (opioids), or other bad outcomes from the medicine.

I have covered this conflict before, and it's exemplified in these two pieces I caught on the internet. Medicine, as a professional culture, needs to maintain an open mind, encourage experimentation (and maybe even collude in it), and stop trying to make everything they study--and everyone else--fit into their imagined model of the world. Critics of "alternatives" to the medicine they learned in school are really criticizing something they don't want to understand, because of its implications. Those implications include slowing down, taking time, making less money, incorporating more hands-on healing, and taking some modest risks with the unknown. It may mean doctors learning to meditate, eat better, learn yoga or tai chi, and embracing the stories, cultures, health traditions, and arts of their patients.

Old timey doctors used to do this more, back before The Factory took over our medical landscape. Maybe some of these "alternative" practitioners are trying to bring it back.

*This link points to just one example of such nursing research, a study I did a few years ago, but it's just one of hundreds of examples.
** For example, I recently learned that an "approved" treatment for a certain type of leukemia--Arsenic trioxide, a remedy also found in homeopathic medicine--originated from studies of ancient Chinese medical texts.