And COVID throws cold water on the summer

I see my last post was in May...I guess I just kind of didn't feel like steeping myself in covid all summer and maybe just live life. Wasn't it great? 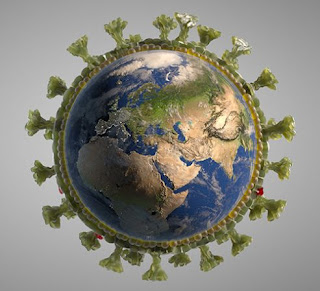 And then there was the delta variant. What happened?

All germs evolve over time. Some faster than others, and to do so they have to have "little germ babies"--or replicate. If they don't replicate, they don't evolve. I've heard some of the talking heads discuss other variants, but officially the first 4--alpha, beta, gamma, and delta--are the only ones listed with the CDC.

Recently the US government issued recommendations that people who got the Pfizer or Moderna vaccines ought to get a booster 8 months after their last shot. There's no recommendation yet for the Johnson & Johnson vaccine yet. The statement was jointly issued by a lot of the names you know: Walensky, Fauci, David Kessler, Rachel Levine--you, the usual suspects.

Ok, maybe that's a little snarky, but not entirely tongue-in-cheek, because I've known some of these names for a long time, and some are more recent, but all of them are caught up in a complex web of forces that they can't always control or balance. Yes, they "look at the science", but they are all still creatures of a political apparatus that can shade things, twist others, or force choices that may or may not always be the right things do do.

The Department of Health and Human Services recommendation discussed above came out August 18th. This article in Nature came out August 4th. It's a summary of what we actually know about the need for boosters, and it basically says: not sure yet. So I have to ask: did the "science" suddenly change that much in only 14 days? I doubt it. I have some notions about why this booster thing came out.

Immunity can decrease over time. We already know this, but the extent to which immunity declines varies over time, and depends, in part, on how much a germ mutates with each generation. For example, smallpox is very genetically stable, so smallpox vaccines work pretty much forever.(1) While for HIV we haven't been able to develop a vaccine yet--that virus displays every known mutation every 24 hours, so chasing it with a vaccine is like a dog chasing its tail!

What about covid? Research suggests it mutates more than the flu but much less than HIV.(2) It's taken about 13-14 months for us to see the delta virus to really get out there, so yes, the coronavirus has been changing, but not at breakneck speed, and I argue that a lot of this was because for more than a year we didn't have any way to curb the spread other than isolating from each other.

The best data shared in the Nature article from August 4th basically concludes "we don't know yet" whether booster are needed, and when. They do say that immunization still protects us very well from severe disease. Some of the scientists who were interviewed for the article believe, "A small dent in the efficacy against infection does not justify, in my view, someone like me getting a booster when someone else has not even had one dose." Much of the science around boosters is based on theory, observations, and population data that may have other explanations. It's not very strong science; but it's making some people nervous.

So yes, boosters will "boost" immunity that has fallen a bit, but a lot of people, including the World Health Organization, argue that the marginal benefits of additional shots don't justify their use in this way. They further argue that we really ought to focus on getting the vaccine-hesitant in the US, and the vaccine-poor around the world, their first shots!

I agree. So why is the HHS recommending boosters?

We're in a weird time. The virus is definitely causing problems. Almost everywhere is Pennsylvania, transmission of covid is rated as "high". You've probably had it again and didn't even know it. You caught a whiff. It got in your nose and generated several thousand copies, which you may have breathed out into the air. But within hours to a day, your immunity smushed those little germs and recycled the proteins...and the bonus? That probably also boosted your immunity too!

So one concern is that "breathing out some virus" part. Obviously that poses a hazard to people with little to no immunity against covid. That's a concern. It's why you're seeing masking orders in some settings. I work at Penn State, which instituted an indoor mask rule just a week or so before we started back to work.

Why no stay-at-home orders? No social distancing requirements? No lockdowns? Simple: We can't do that forever. Some people are locking themselves in again. I can't argue with that; it's a personal choice in my view. But I do think--as much as I hate it--that present circumstances warrant some additional caution, and indoor masking seems a reasonable caution. I don't mask indoors unless it's requested. Last week I noticed Lowe's wants people to mask in their stores. Home Depot hasn't yet. I wear a mask at Lowe's, but not at Home Depot. I still shop both stores.

My personal calculus: I had it in early 2020. I got my shot in mid-2021. I'm good. What about other people's safety? Well, based on my reading of the research and my deep knowledge of immunology, I can say with confidence that my little whiffs of covid are probably more harmful to the unimmunized than to the majority of Pennsylvanians who are immunized (54% overall, 68% first dose). I figure that people who want a vaccine but can't take it are masking and maybe even isolating and taking all those precautions. And people who avoid vaccines for reasons other than legitimate medical necessity? Well, as I said: people are going to engage in their own risk assessment. Unfortunately, a lot of those assessments seem to have landed many people in the ICU--or the grave.

Really, I don't think there's any turning back. This thing is going to go around and around indefinitely. Some people are going to die. Most won't. Over time our systems will continue to develop better and better resilience to the virus. It won't be "herd immunity" as much as it will be "endemic equilibrium." The flu's been killing people for centuries, and we don't spend half the year in space suits. At some point, people have to go on with life and frame risk behavior in those terms.

But the surge is real. In areas with low immunization rates, hospital ICUs are at capacity. Health care workers are burning out. Here at Penn State we're growing new nurses as fast as we can. Hospitals are taking students again, and even letting students work in high-risk settings--as long as proper protective gear is used. Again, we have to move ahead, and now hospitals are reframing their risk calculus in this way: "We'd like to stop the spread...but, we have to move on and get back to business...or there won't be anymore nurses and doctors to replace the ones who have had enough suffering--or died--during this pandemic."

The Surge and Immunity Science Intersect with Politics

So there you have it. Surging infections. Filling ICUs. Resistance to more lockdowns and isolation and business closures. That's the politics behind the booster recommendations: "Let's try to goose immunity to buy some marginal gains against viral spread--plus it'll look like we're doing something!"

In the meantime, the poorer parts of the world go begging. And just where do they think the next strain of virus will come from? Harrisburg? York? Lancaster? Nope, it's going to come from Egypt, Philippines, and Venezuela. I was disappointed in the current administration's public recommendation for boosters in the US, where 60% have been vaccinated. I don't blame it on Joe Biden, though. He's just going along with his experts' advice--his name was not on the HHS report. But I do feel that he and HHS and CDC are bending to the will of what may be a majority of Americans who are still anxious enough to demand more shots. I think it's short sighted, but then history tends to show that people aren't especially focused on the "long view."

What I'll Tell My Patients

There's actually not much that really prevents people from getting covid vaccine. A new patient on a new remedy for complex problems? I might say "Let's wait a bit before getting the shot," or "Get the shot first and come back and see me in a month or so." Complex medical patients like diabetes, heart disease, etc? "You probably ought to get get your shot." The immunocompromised? That depends. Active cancer chemotherapy? Maybe wait. The use of drugs like steroids or Humira? You probably ought to get it. It might won't work as well, but probably beats doing nothing. Each case is different, but the bottom line is this: there are fewer safety exceptions than many people believe.

Right now, I think it's important to stick to the original plan: most folks should get their shots. I don't think it's an ideal personal health solution, but so far I've observed the hazards seem pretty manageable. Honestly, I have yet to see a case where a patient was clearly, chronically harmed by any of the vaccines, even though I know it happens sometimes. But a booster? I think you can wait. Let them examine the data with better methods and over more time first. Individual cases may vary, and I'll deliver that advice individually.