Herbs and Nutritionals Series: The Curious Case of Echinacea

Ok people, we're back to herbs and supplements. This week: Echinacea.

This is a medicinal herb that a lot of people know about. It's supposed to be good for respiratory infections, and a web search turns up others like urinary tract infections, skin infections and so forth. 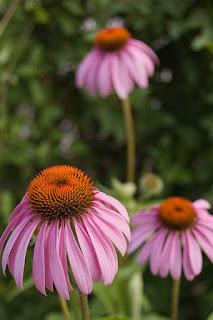 Echinaeca spp. (species, plural) commercially are mainly comprised of 3 specific species, E. purpurea, E. angustifolia and E. pallida (there are said to be 10 species altogether). Over the years I've seen various formulations of these: some contain all three species, some contain only one, with purpurea and angustifolia being the most common, and among the best studied. However, all three have pharmacological activity, especially the flowers and roots. Like many herbal products, potency varies from species to species, crop to crop, and even plant to plant. Some companies who market effective versions of this herb will use wildcrafting knowledge or domestic cultivation techniques to arrive at a harvest of material of greater potency within the natural range of the plant. Some may use post-harvest laboratory testing to validate the potency of a crop, or to survey a crop's variability so as to then blend the harvest to achieve a known potency level.

This was a technique that has been around since the late 19th Century, when mainstream medicine used a lot of herbal medicines as part of its armamentarium, for such drugs as foxglove (digitalis) and nightshade (belladonna).

Echinacea's Actions in Living Creatures
This section title should signal to the reader that a lot of this study has been done in rats and mice, but these studies help us to understand more about how it is that echinacea found its way into North American aboriginal medicine. I've pointed out that plants are complex, and this complexity can lead to two main, positive phenomena: 1) some plants can seem to treat a wide array of problems--which is counter-intuitive to our ideas about Western biomedicine in which one drug treats one thing, and has a very specific effect. 2) While there may be drug actions that predominate, other chemicals in plant medicines often modify those effects.

Echinacea contains a number of active constituents. Alkamides (AL-kam-ides) are long-chain hydrocarbons that appear to modify several immune system activities. One such action is that alkamides stimulate the activity of the "first line soldiers" of the immune system. These white blood cells (some of which actually live in tissue spaces, such as skin, rather than the blood) are the first line of defense against bacterial invaders. Alkamides boost this effect. Interestingly, alkamides also attach to CB-2 receptors--one of two receptors that marijuana products bind to--to moderate immune response by reducing the chemicals that aggravate inflammation.

I'll refer interested readers to an article by Azadeh Manayi and colleagues (2015)--if you really want to get into the weeds on this subject. For now it's sufficient to say that there's real evidence that echinaceas have the ability to both enhance immunity and moderate the harmful effects of inflammation.

Echinacea's Effects in Humans
There's been a lot of study of echinacea, but much of this work is limited by a couple of factors. The first is that, because single herbal medicines are unpatentable, clinical studies have tended to be small and few. There's no money in it. Attempts to combine the results of such smaller and varied studies have led to somewhat confusing results. Researchers have also used different methods--even different preparations--to study clinical effects in people. The second factor is that there's just not as much interest in much of the world in herbal medicines, although poverty (India, Africa) and tradition (Germany, China) have fueled some research into plant-based medicine. The paper by Manayi et al. in Pharmacognosy Reviews I mentioned above was an Iranian team. There's a lot of herbal medicine study out of Iran, perhaps because economic sanctions have led to turning to Nature as a pharmacy in lieu of the easy import of regular drugs. In short: although we have a copious traditional literature about echinacea, the hard science literature is both smaller and more nuanced.

I recently gave a talk to a group of nurse practitioners, doctors, and PAs about herbal medicines, and I covered this plant, so I'll share my summary of some of that nuance here. The research is clear that echinacea modifies immunity toward activation aimed at fighting bacteria and viruses. I've read reviews that suggest that echinacea can be used--if used when symptoms first start--to reduce the duration of or abort symptoms in the common cold. I recently read a review that suggests it can't. One review concluded that it isn't effective to prevent the common cold. A more recent review says it will. Years ago it was reported that, because echinacea really does stimulate immunity, using it daily will eventually cause that part of the immune system to "burn out" and work less well. A more recent report denies this occurs, and indeed 19th Century eclectic physicians often prescribed it for daily use without ill effects in this regard. Another concern is that, because echinacea can activate the immune system, it may cause people with asthma or autoimmune diseases to suffer from aggravations of their disease.

What I've Seen in the Clinic
Echinacea works. Early on I used it strictly for the treatment of things like colds and flus, when plant medicine was desired (as opposed to regular medicines, like Tamiflu), and I have found that it works most of the time to either stop (if taken within 6 hours or so of the very first symptom) or shorten a cold (if taken at any time afterward). The longer the cold or flu has been going on, the less well it works.

Years ago I began to turn to elderberry as a first line treatment for colds and flus because it has fewer theoretical safety concerns, and because it's become very easy to get at regular retail pharmacies (because you know, people tend to get sick on evenings, weekends, and holidays!) and the quality is generally known to be good. These days I tend to use echinacea for cases of other types of early infection, such as minor skin infections, dental abscess, "stomach flu", and urinary tract infection (UTI). I do still use it sometimes for respiratory infections as well.

One problem I tend to see with it is that potency matters, and many people purchase products that are likely to be of low potency, such a dried-powdered herb in capsules. In my practice I tend to recommend either a liquid product (in alcohol or glycerine) or a standardized liquid or solid extract (in gel caps) as the approach-of-choice, as these are products that have the potency needed to achieve clinical results. You may see such products labelled as "standardized" to a certain percent by weight or milligram strength of "echinacosides", which are caffeic acids, themselves not necessarily immune-stimulating, but a marker of plant potency.

What about the downsides suggested in some reports?

Based on my clinical experience, most of these are overstated, and even authorities on this subject suggest that these concerns are more theoretical than actual. In my own practice I have seen a few cases in which mis-use of echineca led to activation of asthma and rheumatoid arthritis, and even a couple of cases in which the supposed "immune burnout" actually occurred.

This is how I view echinacea now:


Overall, my feeling about echinacea has changed with time. I tend to view it as a choice that should be used with professional guidance, but have also found that most people won't do themselves any harm using it on their own.

And, in the spirit of my last blog post: If you aren't getting better, and you're getting worse on something like this, seek professional assistance! Don't keep doing the same thing if it isn't working.
On that note, let me add that this article is educational and is no substitute for professional medical advice--you just have to find a professional with an open mind and a bit of experience!