Ah, Summer...When We Get Kids Ready for College: Meningiococcal Vaccines

It's right around this time of year when some of my families are looking forward to high school graduations. Some of these kids I've seen for a long time, and now they are becoming adults. Some are preparing for college, and it's during this final summer that they are facing all of the details of making the move from living at home to living away at the colleges they've chosen.

So I thought I'd take a moment to share a question I often get at this time of the year when parents and their college-bound children are faced with vaccination requirements. The big one seems to be meningiococcal vaccine, often called by its brand name, Menactra (1).

Nisseria meningitidis (NIS-air-e-uh men-in-JITE-ti-dis) is a type of bacteria that has been around for a very long time. It's not a new bug. It's also not an uncommon bug--and many people carry it around without developing disease (about 1.3 to 1.5% according to most studies, or about 13-15 people in a thousand). There are several "serotypes" or subtypes of it, with some being more prone to cause disease than others. Meningiococcal meningitis (MM) is an infection of the meninges, the layers of tissue that surround and cushion the brain and spinal cord. It's not pleasant, and it can kill. If it doesn't cause death, it can still leave survivors with lingering problems with brain function, although these are usually more annoying than serious. It can be treated successfully with antibiotics.

Several years ago there were a couple of outbreaks of MM at Princeton and University of California, Santa Barbara, among students residing in dorms. National Meningitis Association reports on a few others that have occurred since then at other colleges. Prior to that time, there wasn't any commercially available vaccine in the U.S.--there wasn't enough demand for it. Because although N. meningitidis is a germ that lives in the upper respiratory tract, it hardly ever causes disease. In living situations in which a lot of people are living together (large dorms, military barracks, prisons) some types of MM can spread to others pretty easily.

So the Centers for Disease Control have recommended immunization against MM for everyone for a long time--might as well get everyone vaccinated, since you don't know who is going to go on and do what, right?

After the Princeton and UC outbreaks--which was caused by a specific subtype, "B"--colleges decided that they wanted all their incoming students to have the MM vaccine. A "B-type" vaccine wasn't available here, so industry developed a couple.

It's fortuitous that a short while ago I ran across an article in Family Practice News that discusses the history and utility of the B-type vaccine. So with college preparations coming up, and a new crop of my former-youngsters going on to become young adults at college, I thought I would share.

You can link to the article above, but here's the gist.

The article focuses on subtype B vaccines, which are strongly recommended to students coming to college but not officially recommended by the CDC. The "polyvalent" Menactra and similar products are intended to prevent several subtypes (A, C, Y, and W-135). Two other products are designed for subtype B (Trumenba and Bexsero). The former, polyvalent vaccine, is recommended by the CDC for all kids at ages 11-12 and a booster at ages 16-18. The B type is mainly recommended by the pharmaceutical industry, as in this ad by GlaxoSmithKline. The article's authors suggest that the high price of the men-B vaccines ($300/dose) is money that may be better spent on other health issues and prevention, and their argument is posed regardless of insurance coverage.

Insurance doesn't mean you don't pay for it--you just pay for another way, as such costs are absorbed by the entire risk pool. A kind of tax, if you will.

Men-B is harder to transmit. There has to be actual contact, like kissing for example (and of course kissing never happens in college!) whereas other MM types can be spread by coughing and other non-direct contact. Interestingly, N. meningitidis is what we call "fastidious"; it is very picky about where it lives, and it readily dies on inanimate surfaces.

Men-B immunization is an example of how the pharmaceutical industry capitalized on a couple of small outbreaks that led to some fatalities and a massive freak-out, amplified by trial attorneys filing lawsuits against colleges. The high price is said to seem small "when it's your child...".

So what about the other types of MM?

If you do the math, MM occurs at a rate of about 18 per 10,000,000 people or about 1 in 500,000. Your kid has a higher chance of dying in a car accident, on a ski trip, or just going to an alcohol-soaked frat party. It's true that many parents view the low risk of vaccine-related serious side effects as worth the price. Witness this quote from the FPN article above:

“As a mom, I would say, if my kid got this disease, and I had had the opportunity to prevent it, and I didn’t, I would kill myself,” said Martha Arden, a practicing physician and the medical director of Mount Sinai Adolescent Health Center’s school-based health program in New York City.

But then there's this data from the CDC: 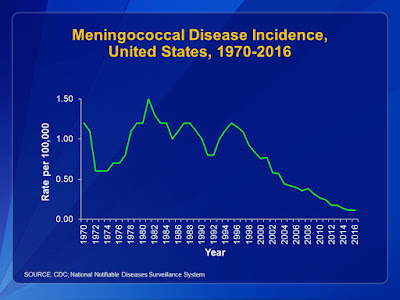 Clearly, rates of this disease are going down. This may be due to more vigilant immunization, or some other cause--the data aren't clear on this. Down below, we see that the highest rates occur in infants--who aren't eligible for the vaccines until age 9 months--and older folks, who are often infirm, and thus more susceptible. 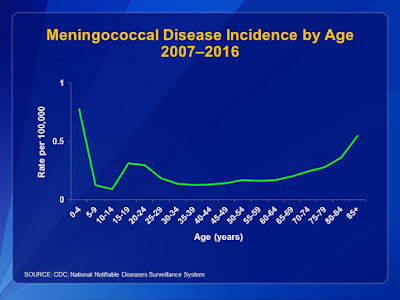 So what's a parent to do? What do I advise my families?


Good luck to all my college-bound patients and their families this fall!