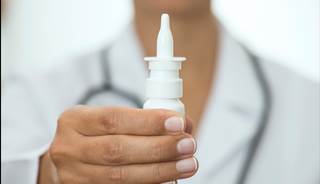 One of the concerns I've had about vaccines is that we humans have evolved to mount an immune response to bacterial and viral invaders as they come to us. For example, tetanus is "injected" by deep injuries into soft tissue. Polio is ingested in the mouth and invades via the gastrointestinal tract. The flu is either inhaled into the nose, or gets sort of rubbed in there when our hands touch a contaminated person or surface, then we touch our own faces. (This is why hand-washing is such a big preventive of infections!)

So, I've always thought that it would make the most sense to deliver vaccines to people the way the germs are "delivered" to us in nature. Thus, FluMist, sprayed into the nose should be safer and more effective than injecting it into the arm with a needle; and polio vaccine dropped onto a sugar cube and eaten (anyone remember that? I do.) should be safer and more effective than another shot. Right?

However, in both instances this hasn't been the case.

Oral polio vaccine is no longer used in the country because it led to a detectable increase in cases of "post-polio syndrome": a condition in which polio-like paralysis occurs late in life. This has been seen in both types of polio vaccination, but the oral form seemed actually worse and more frequent. Now this week we find that the effectiveness of intranasal flu vaccine is only 3% in children aged 2-17. (Adults were not discussed in this article.)

Then there's the case of hepatitis B vaccine. The manufacturer states that it must be injected into the arm muscle (the deltoid) in young people and adults, rather than one of the other common sites (the rear end, the thigh, etc.) we could use. This is because immunity doesn't "take" as well when injected into these other sites.

Well, it's likely that multiple factors affect this equation: composition of the vaccine (protein "parts" vs. killed virus, for example), how much blood circulation a vaccine site gets, and perhaps some special aspects of the genetic coding of our immune cells and how that plays out in the overall system.

For a long time, I felt that we should try to give vaccines to people just like Nature gives people the germ in a natural setting. I felt that made intuitive sense. These days, I no longer believe the analysis is that simple. Not everything we intuit about medicine and biology works out the way we believe it ought to--and this, of course, is the purpose of science! For the reader contemplating a flu shot next season, the less painful path may not turn out to be very effective, which is too bad, especially for the kids who don't like shots (and that's all of them, right?)