Ok, the title sounds a little pedantic, but the lesson doesn't have to be. Anyway, thanks to all who follow this, for your patience while I've been taking care of some business during the holiday break. The semester just began, so I'm back!

The inspiration here is an article I read online back around Thanksgiving Update on the Ethics of Mandating HPV [human papilloma virus] Vaccination. HPV is a virus that comes in many strains, and a few strains can increase risk for cervical cancer. Women, especially, will appreciate it as a concern that has driven regular check-ups--"Pap tests"--over their adult lives. Catching the cancerous changes early has a 100% cure rate, and numerous studies over the decades showed that regular Pap tests reduced the rate of cervical cancer to a rarity. HPV vaccines were introduced in 2006, and public health experts pronounced that this was "the first vaccine that prevents cancer" and that it should be used throughout the population.

In the following 12+ years there have been arguments pro and con. I shared the former above. The con arguments ran to these...


...and so on. Use of the vaccine languished for a number of years. Some state legislatures tried to mandate that HPV vaccine be included in the required immunizations for attendance at public school. That didn't always go over well with parents who were also voters. Since then, the Centers for Disease Control report that immunization rates have increased. There's more acceptance of it, and its use has been expanded to include boys. (After all, girls have to get the virus from somewhere!)

Advertising helped. Check out this ad from Merck in which adorable young people ask their parents if they knew about this vaccine that can "prevent...cancers". I mean, what parent wouldn't feel guilty about not paying whatever it costs to immunize their kid against cancer? (In fairness: many insurance companies now cover the cost of HPV vaccination.) But this article is about the ethics of medical technology and medical decision-making, so let's go there next.

Our sense of right and wrong is governed by two things: ethics and morals. Morality is a personal framework for the determination of right and wrong, and guides us in how we should act in society. It may include our religious or spiritual beliefs, and so its application may be limited by some circumstances. For example, some Christians believe that God rules against abortion, and so for those folks, abortion is wrong. Someone who doesn't subscribe to that religious view may believe that abortion is a suitable choice in some circumstances, and what circumstances permit that choice may also vary among individuals based on even more specific values. Morality is determined by culture, religion, psychology, and a variety of other factors.

Ethics has a similar dictionary definition, but more precisely it's a body of theory that attempts to help people choose right from wrong using broader social and historical bases. It's a branch of philosophy and so it's unbound by any specific religion. Here are a few examples of ethical theories, some of which the reader may be familiar with, but this list is not exhaustive--just some examples!

Utilitarianism: the theory that suggests that we should do the thing that does the greatest good for the greatest number of people.

Duty: philosophers will recognize this as "deontology", the theory that suggests that formal rules of conduct--the laws of a society--determine what is right or wrong.

Contractarian: and if you recognize the word "contract" in there, you can see that this would be the theory that argues that what is right and wrong is based on what everyone involved agrees is right or wrong.

Making an argument on ethics means making an argument within a theoretical framework, and there are parts to that framework. Autonomy is something that most of us in America feel is an important feature of our personhood. Being able to "be ourselves", to pursue "life, liberty, and...happiness" is a thread that runs through medical decisions. We should be able to choose medical therapies based on what we want, not what we are told to do by a doctor or a nurse. In mainstream American ethical thinking, autonomy is very important. In some cultures, not so much. For example, some of my colleagues at Hershey Medical Center work with many Amish, and in some situations Amish families may decline life-saving medical treatment because the "greater good" (utilitarianism) is better served by foregoing expensive treatment that seems to go against God's will and can cost the community a lot of money, when that money could better used elsewhere. You get the idea.

Ethical Tension in the Immunization Debate

As I've suggested elsewhere in this blog, a lot of the passion about whether or not to immunize comes down to different ethical approaches to this issue of what's right and wrong. In the article I referenced above in Infectious Disease Advisor, lawyer and professor of medicine at Georgetown University, Lawrence Gostin, states "I think that mandating the vaccine has public health benefits far beyond the small intrusion on individual rights. Thus, a mandate should be in place for all recipients recommended by the CDC unless there is a genuine religious objection — that exemption should be quite narrow."

Gostin is making a utilitarian argument. What's better for all should be chosen over what's thought by some to be better for themselves. He argues that giving up a little bit of personal autonomy is more right than wrong because it is in the "best interest of the children receiving it"--although I'll be quick to note that neither Gostin nor the article's author provides statistical estimates of just how many people would benefit. However, I dug around a bit and found that a team did use mathematical modeling to estimate how much disease and death could be prevented (Van Kreikinge, 2014). 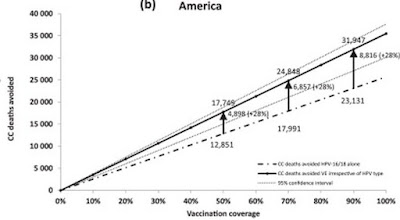 Here, I've just shared one part of one of the results they share that's relevant to Americans. Basically it says that the more people you vaccinate, the more lives are saved. I have a couple of problems with this estimation. First, I used to do gynecology and examined (literally) over a thousand women for cervical cancer surveillance. What I found was that if women were poor, without insurance, or otherwise limited in capacity for self-care, they could get full-blown cervical cancer. Women with good education, good health care, reasonable hope for a prosperous future, and so on would not get past the very early stages of cancerous change. Simple outpatient treatment was 100% effective.

Second, two of the study's authors are paid employees of Merck, Inc. Think there's any financial incentive to create a rosy mathematical model that underscores the importance of getting immunized? Do you think that the study included in its estimates the impacts of wealth inequality, war, food insecurity, unfair labor practices, or any of the host of social and economic factors that also have an effect on what kind of health girls--or boys--receive? It did not.

"Ethical" Pronouncements as an Excuse for Ethical Truth

I get it. Doctors, nurses, public health advocates and policy makers all want to believe they are doing the right thing. They take one little thing they can run with, whether that's vaccines, or medicines like statins, or healthy eating or whatever, and they use it as a pivot to make the argument that people should do this because it's the "right thing", and it may be small, but it will help.

Where this goes wrong is the argument that follows on: if you aren't doing this, then you are wrong. It's the same argument that doctors use to vilify alternative medicine practitioners. It is unethical to use homeopathy with patients, or to recommend supplements, or to suggest vaping over smoking. "There's no evidence" (well, there often is, but it's not "enough" evidence).

Really, this is all just an excuse for moralizing over someone else's choices, when the evidence for harm from such things may be minimal. Ethical truth is a personal, moral state of thoughtful calculation that considers the autonomy of another person, and the importance of valuing imagination and cooperation, over a static moral framework and its use to dominate others in order to feel superior.

While I am aware of the value of HPV vaccine in preventing some cancers in susceptible persons--as the author of the article I shared notes--I do not agree with the ethical calculus. I would argue that it's an excuse to avoid talking about bigger social problems that lead to the deaths they would like to prevent. Further, it's an excuse to write a prescription in a few seconds, rather than to work with people to understand and help them build upon their own health choices.